Collins remains one of the most colourful characters in boxing. He made his mark during the 1990’s, holding the WBO Middleweight title between 1994 and 1995 before going on to become the WBO Super-Middleweight champ between 1995 and 1997.

He had a fight record of 36 wins, 21 knockouts and just three defeats.

Now 41, the affable Dubliner has many great tales to tell from his time in the ring. 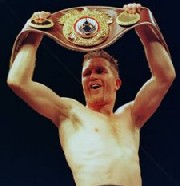