Billy Flywheel is a comedy talent not to be missed. Laughs galore are guaranteed from this zany and most original of entertainers.

His jokes, Impressions, send-ups and magical routines are bizarre and off the wall as is his interactive audience involvement, creating mayhem and hysterical laughter!

Billy has over 90 minutes of comedy material enabling to tailor his act for whatever the need or occasion. He also possesses a good quality singing voice with over 60 minutes of songs from the 60's onwards, making him the complete all round entertainer.

Billy Flywheel has been a professional comedian for twelve years. He has appeared on National television six times and won South Yorkshire clubland comedy award in 1999 & 2003 and has been acclaimed a comic genius in numerous publications i.e. the stage and several other entertainment magazines.

Billy is a hugely popular choice for high profile mixed corporate functions, as well as 'Top Of The Bill' cabaret at all major holiday camps, parks, hotels and night spots, both at home and abroad, ensuring everyone of a fantastic and memorable nights entertainment.

Billy Flywheel offers something different. Bordering slightly on the Speciality/Novelty side of comedy, his act is hugely popular, very entertaining and hilariously funny! 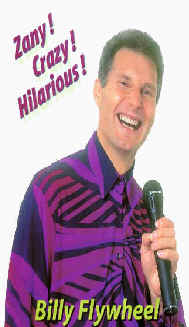