If you are looking for one of the most experienced comedians then Frankie Allen is for you. Liverpool born & bred and a professional for over 25 years.

His quick mind will have your audience in hysterics with his fast off the cuff remarks and personality.

He gained his trade around the many clubs in the North of England. Following national exposure on the highly popular TV series, 'The Comedians'. Frankie was a winner of 'Bob Monkhouse's - Opportunity Knocks and co-hosted Central Television's Live Programme which broadcast all over the Midlands for over a year.

Frankie has entertained 'Her Majesty's Forces' in - Germany, the Gulf, and The Falkland Islands.

Frankie concentrates on the After-dinner market, and sporting functions where his popularity has rapidly grown. At home on a golf day, sports dinner or corporate event, Frankie's brand of humour is equally received by all, whether it be all male, mixed or of any age group working alongside such notable names as - Sir Henry Cooper - Barry McGuigan - Boney M. 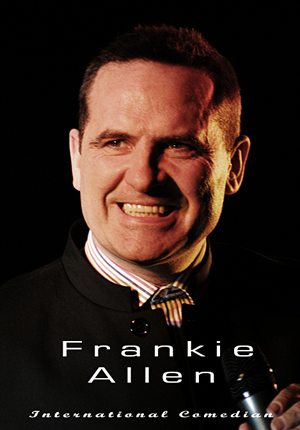