Barry Fry was born on April 7, 1945. He has been an football manager and is currently Chairman of Peterborough United FC.

In 1973, Dunstable Town received the financial backing of Keith Cheesman. He hired a young Barry Fry as manager, and gave him money to build up a strong team; indeed in his autobiography, Fry claims that he was often given blank, signed cheques. Of note, both Jeff Astle and George Best were brought in to play for the team (Best only actually playing three competitive games). Fry was later dismissed by Cheeseman's successor, Billy Kitt, after a poor performance in the Southern League.

In 1979 Barry became Barnet manager for the first of two management spells covering almost 13 seasons. In his first spell, Barnet maintained a mid-table position in the Alliance League for 6 seasons before Barry left in December 1985 to manage Maidstone. He returned to Barnet in August 1986 for a further 7 seasons. Three times runners-up in the GM Vauxhall Conference, Barry achieved his first managerial success as Champions in 1990/91. Two years later he guided them towards the new Division Two (leaving two months before the end of the season to manage Southend) despite being sacked eight times and reinstated each time by controversial chairman Stan Flashman, as well as being in charge of a club which was in a precarious financial state and under threat of expulsion from the Football League.

At Birmingham City, he won the Division Two championship in 1995. During the 1995-96 season, Fry guided the Blues to the semi-finals of the League Cup but was sacked after their mid-season promotion hopes faded and the club finished 15th in Division One.

Just after leaving Birmingham, Fry became chairman-manager of Peterborough United. They were relegated to Division Three in his first season at the helm but they regained their Division Two status three years later. Fry's nine-year reign as manager came to an end in May 2005 after they were relegated again. He owns the football team (but not the stadium, although he is a director of the Holding Company which owns it) and was the Chairman for the 2005-2006 season. This season witnessed the departure of Mark Wright and Steve Bleasdale as first team manager. He stepped aside as Chairman on 18th September 2006, but continues have a majority shareholding, and is the current Director of Football. He described his successor as chairman, Darragh MacAnthony who now has purchased 200 shares, as "The best signing Peterborough have ever made". MacAnthony has stated his ultimate goal is to become the sole owner of the club.

Fry starred in a documentary called There's Only One Barry Fry.

The programme included some of Fry's dressing room antics, including a row with Mick Bodley and his promise to get the Posh out of the division. He did - they got relegated!

Barry is a character from the game and has some fascinating and extremely funny stories to share, if you book Barry "hold your ears back" and enjoy a GREAT evening! 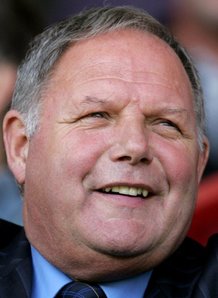