Dennis was born in West London and joined Wimbledon in 1985 as a 19 year old. He is a hard working and exciting central midfielder.

Dennis played in the well remembered 1988 FA Cup final against Liverpool in which Wimbledon won 1 v 0.

Dennis joined Chelsea in 1990 where he had a great deal of success. Between 1997 and 2000 he was part of a successful Chelsea team winning two F.A. cups and a European Cup Winners Cup.

He had short playing stints with Leicester, Millwall, Southampton and Coventry and has had 21 England caps.

Dennis is regarded as a real character in the game. 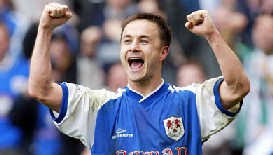