Dermot Gallagher was one of our country’s most high profile and respected officials. He officiated in the Football League since 1985, and was amongst the first band of Referees on the commencement of the FA Premier League in 1992.

Dermot retired from the Premier League at the end of the 2006/2007 season. During this time he was also a FIFA referee for over 9 years, officiating in 139 matches abroad

In May 2008, Dermot Gallagher joined ITV1′s Beat The Star as a competition referee and now is appearing as a weekly summariser on Sky Sports and Talk Sport.

Dermot’s new favourite pastime is playing Golf and with this, he is available to participate in Corporate Golf days and makes the perfect MC and / or Speaker to  keep guests entertained at events such as dinners and presentations. 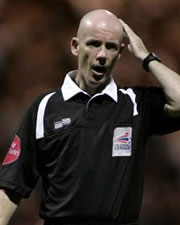