England goalkeeping legend Peter Shilton has gained more caps for England than any other player and he was the youngest player to play for Leicester City at the tender age of 16 - taking over from the equally legendary Gordon Banks.

Throughout his amazing 30 year career he played for 11 English league clubs through which he accumulated a record 1005 League appearances. In 1977, Shilton joined the newly promoted Nottingham Forest, who went on to shock the footballing world by winning the league title on their return to the top flight. Even bigger success followed as Shilton was a big factor in Nottingham Forest winning two successive European Cups.

In his record 125 National appearances, the England team won 66 of their games. He was still playing at international level in the 1990 World Cup at the age 40.

Perhaps one of the most remembered moments in Peter’s career was in 1986 when he became the victim of Maradona's cheating 'hand of God’ and the famous individual goal Maradona scored by snaking through the majority of the England side before rounding Shilton to score.

During his playing career, Peter won the PFA player of the year and has received the MBE and OBE for his services to football. In 1990, after his retirement, he was awarded the Order of Merit by the PFA. 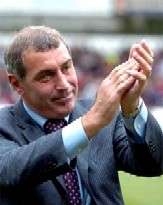