Paula is the only Dame Shirley vocal tribute to have been chosen to sing a ‘guide vocal’ for Dame Shirley herself and her production team for the new CD which was released in October 09. The ‘first’ Dame Shirley Tribute to incorporate not only Dame Shirley’s very latest songs from the CD but has also created an unbelievable, exact replica silver sparkling gown and ostrich feather trimmed coat, worn by Dame Shirley on the BBC Electric Proms Programme for the launch of her new CD ‘The Performance’! Paula’s attention to detail is second to none. Sourcing fabric directly from China. Ostrich feathers made in the UK by the very same manufacturer as Dame Shirley’s.

Combining her incredible vocal power and range to recreate the Diva of all Divas, Dame Shirley Bassey with her 'Get The Party Started Show' and her new show entitled ’The Performance’ Not only does Paula create the 'new look' Dame Shirley, she will deliver the inimitable Dames magnetic personality and unique style that spans her amazing triumphant 50 years in show business. Paula will have you believe you are listening to the Diva herself. Her forte is her amazing vocal strength and uncanny vocal likeness, which enables her to sing with the precision and exact power that is Dame Shirley Bassey!

Attention has been paid to the exacting detail of the Dame's voice, interacting with her audience and keeping in character throughout the show. Paula’s attention to detail does not stop at the ‘image’ and glittering gowns but extends to her exclusive backing tracks that are specially recorded, at great expense, in order to replicate precisely the same arrangements Dame Shirley uses for her Concert Performances both recent and in the past.

Fabulous songs from the CD entitled ‘The Performance’ are included in her show and delivered with impeccable vocal precision. The Girl From Tiger Bay; Apartment; Almost There; This Time and more. The show takes you through the years starting with Get The Party Started image and with the glitz of her stunning gowns singing many of your favourite ‘oldies’ from Big Spender; Kiss Me Honey Honey; S'Wonderful; Never Never Never; Lady Is A Tramp moving on to The James Bond Movie set including all the greats. Diamonds Are Forever; Goldfinger and another surprise ’Bond’ style song from her latest CD. The only viable alternative to Dame Shirley Bassey. A glamorous, glittering, spectacular and fun show not to be missed!

Get The Party Started

The Girl From Tiger Bay

No Good About Goodbye

I Am What I Am

Lady Is A Tramp

What Now My Love

As Long As He Needs Me

I Who Have Nothing

This Is My Life

As I Love You

If You Go Away

You’ll Never Know and many more!

Walkers Crisps and many more!

"Paula I think you're AMAZING!!! When & where are ya gonna be soon baby!! GRRRRRREAT Voice. Lots a love and respect" - Nikki Lamborn. Nikki co-wrote and produced Dame Shirley Bassey’s single ‘The Living Tree’, and performed it with her on the main stage at Glastonbury 2007.

"Paula, you are the best Shirley Bassey I have ever met. What an incredible DSB voice and likeness to Dame Shirley, your power and intonation are superb! You've definitely 'mastered' Dame Shirley, she would be proud of you!" -Nikki Lamborn. Dame Shirley Bassey's Writer/Record Producer of her most recent re-mix Album, DSB Get The Party Started and close personal friend. During a 'session' at Dean Street Recording Studios, London. 4th Nov 08.

"Your performance was amazing. Opening with Get The Party Started, you certainly did that. When you emerged from back stage wearing the authentic costume we thought you were miming to Shirley's record! Absolutely fantastic, all the mannerisms and class of Shirley Bassey. Thank you so much for getting our launch party started, nothing was too much trouble for you. You are such a professional! -Amanda Emery. Event Organiser. Britvic Soft Drinks 'High Performance Awards 2008' & Tango Advertising Campaign. Holiday Inn, Stratford-upon-Avon. Oct 08. » Show Formats & Equipment. 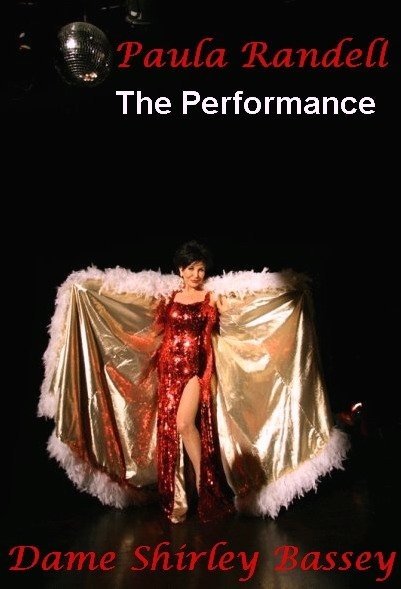